Last night I attended the opening night and media preview of The Queen Mary's Dark Harbor where Alpine Village has been transformed into the stuff of nightmares.  The last time I was there it was a winter wonderland but it was barely recognizable in its current incarnation.  From the moment you enter you are surrounded by ghouls, monsters, oddities and very macabre décor.  I couldn't think of a better way to kick off the Halloween season.


New this year is the Lullabye attraction which is one of three mazes that take place on the Queen Mary itself.  The creepy characters coupled with the haunted history of the ship make the mazes that much scarier and I loved every bit of it!  In this maze, the  ghost of 9-year-old Scary Mary beckons for you to come and play with her... for eternity.  She may be dressed like a living doll and her voice may sound sweet and innocent but I learned the hard way that her idea of fun is anything but either of those things.  This was probably my favorite maze.
Also aboard the ship is Soulmate.  A soulmate is just what this maze's ghost, Graceful Gale, is looking for.  We were told that she lures men in and rips them apart, using their pieces to make up the perfect man.  From the looks of things she's enlisted some help from other restless spirits.  One of which was unrelenting in his refusal to grant me safe passage from the ship (these characters are really committed to their roles).  Suffice it to say I made it out alive which is more than I can say for some of the other visitors.  Or what was left of them, anyway.  I just feel like there's a better, less messy way to go about these the search for Mr. Right.  I wonder if she's ever heard of eHarmony? 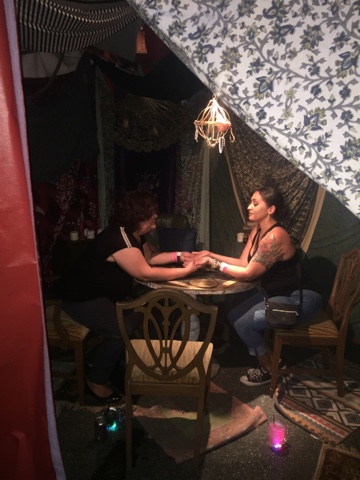 My guest (and photographer), Chrystina, and I found ourselves at the Sideshow lounge for a good portion of our visit (because, you know, drink tickets and whatnot).  But we wouldn't have been able to guess how cool it was inside judging from the entrance.  We thought it was just another maze.  However, what awaited us was a pretty well-stocked bar, a stage featuring continuous 10-minute sets of side show acts, roaming freaks and oddities, and several mini attractions within conex containers.  We couldn't find the fortune teller but her tent made for a nice photo op so Chrystina tried her hand (or mine?) at palm reading.  She saw a tall, dark stranger in my future and she was right.  Yikes!

There is so much more to see and do at Dark Harbor that I could go on and on about but you really need to see for yourself.   The event runs through the month of October so you have plenty of time to get yourself to Long Beach but I do recommend arriving early because the lines can get long and you want to make sure you get a chance to take it all in.  I cannot believe this was my first time at this event but I can guarantee it will not be my last.  Tickets are available now starting at $20 on select nights.  If you want a more VIPish (or RIPish in this case) experience, as little as $94 will get you admission, a Fast Fright Pass (front of the line), admission to the RIP lounge (free food) and three drink tickets.


One last thing, and I'm totally about to out myself for being an undercover punk but I am primarily a mommy blogger so I have to say it.  Although I had an amazing time and I can't wait to go back, I did have nightmares last night and woke up with a sore throat from screaming in the mazes.  That being said, I would not recommend this event for children under 13.  Which is fine because mommies (and daddies) need a night out sans kiddos from time to time, n'est-ce pas?