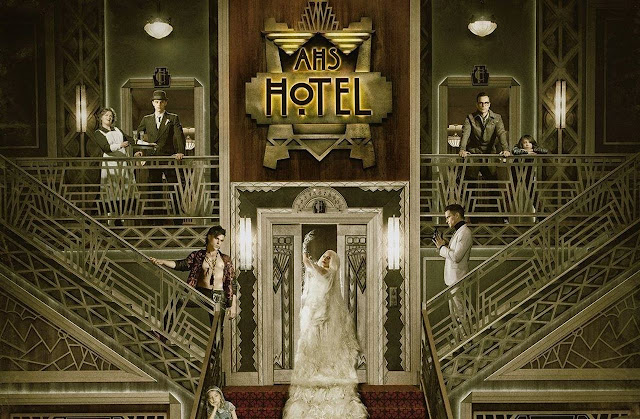 
While I am an admitted TV junkie from way back, there are but a handful of shows I get really excited about.  American Horror Story is one of them and it's back in its fifth incarnation as American Horror Story: Hotel.  Last night's premier pulled no punches, giving me everything I expect and adore from Ryan Murphy's twisted (genius) mind:  sex, drugs, gore and glam.

Many of our regulars have returned this season while new guests have checked in.  Sadly, Jessica Lange does not appear to be one of them.  Of course, the most anticipated arrival has been Lady Gaga as The Countess, owner of The Cortez Hotel where it all goes down.  She is quite a presence and adds a great deal to the show's aesthetic but beyond that I'm still left wondering just what her story is.  Is she a vampire or just a freak?

I love what AHS does in terms of reinventing itself every season and I'm always interested to see the actors appear as entirely new characters that I may either love or hate (but ultimately love regardless).  The hotel is filled with lots of interesting personalities whose layers we've yet to peel back and discover but suffice it to say that just because you loved the persona an actor portrayed one season does not mean you're going to feel the same the next.  Good example- in the first episode, Max Greenfield's character, Gabriel, finds himself being sodomized by a faceless creature shortly after checking in.  While he's being victimized Sarah Paulson's Sally enters the room and asks him to tell her he loves her.  Unlike Paulson's portrayal of Lana Winters, heroine of season two's Asylum, Sally clearly has issues that run deep and she's not here to help.

I have so many questions about this season that I'm sure will be answered but for the time being I'll just enjoy the spectacular ride that is Hotel.