Event/Giveaway: "You Write the Rules"

I don’t know about you, but I grew up watching Scooby Doo cartoons every week. Some of the best episodes (or episode? I was too young to understand the concept of reruns) were when the Harlem Globetrotters guest starred! I had no clue they were an actual basketball team until a little later, but I was even more entertained seeing real life Globetrotters handle the ball the way they did and still do. I have always wanted to see them live so when I heard they’re coming to town next month, it was a no brainer- I’m taking my family to see them in action! 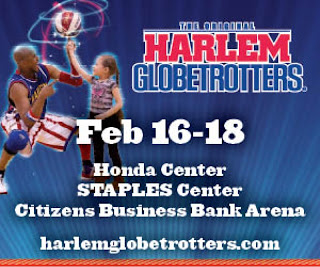 President’s Day weekend, the Harlem Globetrotters will be swinging through Southern California on their 2013 “You Write the Rules” World Tour. And what’s really cool is that for the first time ever fans will be voting to decide the game’s rules! That could mean anything from playing with two basketballs at once to getting double the points for each basket a player makes. Head over here to vote! (I voted for players to use two basketballs- picture that)

Tickets (starting at $17) are on sale now at www.harlemglobetrotters.com and venue box offices, but I want to give one lucky L.A. Mama reader the opportunity to spend special quality time with your loved ones at Globetrotters game! Enter below and tell me your unique “new rule” idea for the Harlem Globetrotters basketball tour. You will be entered for a chance to win a family four-pack of ticket vouchers to one of the following games (winner’s choice):

Posted by brunchinla at 7:35 PM