A Twist on Chicken Noodle Soup 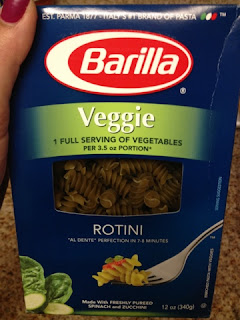 It's winter time and that means hearty meals in my household.  But it's also the first of the year and that's about when we try to be a little more health-conscious and start tweeking traditional recipes.  Two things inspired this twist on chicken noodle soup.  The first is that I've been sick since Christmas Eve and it just seemed like the right thing to do.  The second is that I recently attended the Barilla National Spaghetti Day twitter party hosted by the Resourceful Mommy blog. 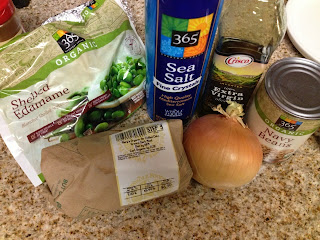 During the twitter party the subject of healthy eating came up and a lot of new products I wasn't aware of were mentioned.  Veggie pasta was one of them, so I set out to the grocery store to find some. 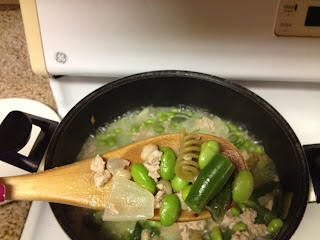 Now, what I love about soup is that there's so many ways to make it your own (and it's super easy because I'm super lazy).  I added edamame, ground chicken, navy beans, green beans, onion, sea salt and veggie pasta to an organic chicken broth (the EVOO was for the onions) and in about 20 minutes we had a hot, hearty, healthy meal. 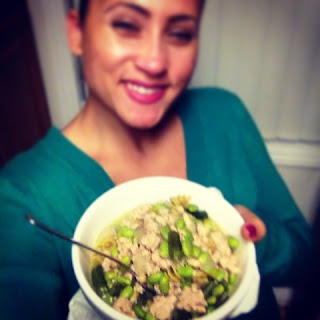 It never ceases to amaze me how someone so not domesticated can love food so much.
Posted by brunchinla at 7:09 PM