As a kid I never much cared for honey. I didn’t care how they dressed it up with in that teddy bear-shaped squeeze bottle, I wanted no parts of it. To me, it tasted like booty or what I thought booty might taste like. It wasn’t until a few years ago when I was suffering terribly with seasonal allergies that I gave it another go. Someone somewhere (I can’t remember who) suggested trying a raw, local honey to help alleviate allergy symptoms via immunotherapy. Basically building the body’s resistance to allergens that had been giving me the blues. Like I always do, I paid a visit to Whole Foods (because that’s where the good stuff’s at, right?) and consulted with one of their employees. I wasn’t looking for flavor in my honey, I just wanted some natural relief in lieu of depending on OTC meds. Of the many varieties of honey, the clerk suggested a local sage honey from Honey Pacifica. I took his word and off I went.

The initial impression was based on looks alone. First of all, it had a honeycomb in it . What was I supposed to do with that? Can you eat that? Weird. I had no intentions of taking a spoonful of this stuff alone, so my grandfather suggested I mix the honey with ground cinnamon and put it in my tea. Again, what do I know? So I did what he said and I was pleasantly surprised. I can’t say that the honey or tea did anything miraculous for my allergy symptoms but what it did for the flavor of my tea was undeniable! I tasted it by itself and it was clear that this honey was something special. It’s sweet like sugar but not at all overpowering and it doesn’t have that artificial/nasty taste that I associate with most other honey varieties.

I started replacing sugar with Honey Pacifica Sage Honey on all sorts of things: My oatmeal, smoothies, cinnamon toast- you name it. In fact, I haven’t purchased sugar in three or four years now. I never figured out the purpose of the honeycomb in the jar (although I’m certain there is one) and it kept getting in the way so I stopped buying that particular variety, which is fine because I found a larger jar sans honeycomb that lasts much longer for about $20. But even with that I’m running through a jar every two months or so.

I’m still learning a lot about this brand that I’ve come to love. Like the fact that it is a real deal family-run business that’s been around as long as I’ve been alive, so they’ve got this thing down. They make all sorts of other products that I’ve only recently discovered like flavored honey in peach, raspberry, lemon, and pear. I haven’t found these in any of the Whole Foods stores I shop at but they are available online at www.honeypacifica.com and the local farmers markets they frequent (their schedule is on their website). If you’re able to get your hands on some, I highly recommend it and I’d love to hear your thoughts. Comment away! 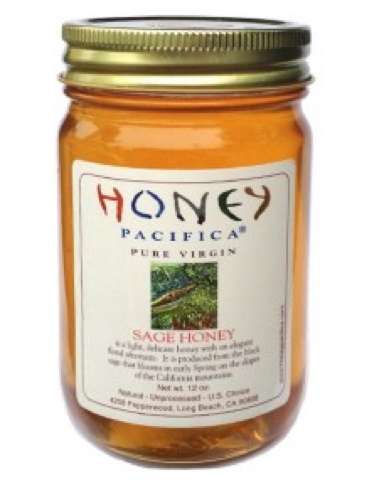