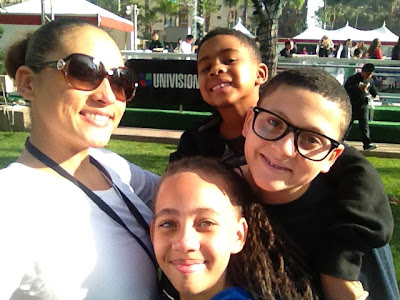 As is if weren't any more obvious from my posts, my family and I are always on the go.  What better place to go than Los Angeles?  Whether you're a local or just visiting, L.A. has so much to offer in terms of family fun.  One of the things I love about living here is that you can swim in the ocean, trek through the desert, visit the mountains and play in the snow all in the same day.  I'm not.  But you can.  Frankly, I didn't have to last Saturday because Pershing Square in Downtown L.A. brought the snow to us lucky Angelenos for their annual Winter Holiday Festival. 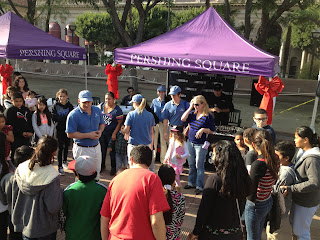 Just off of Olive and 6th, surrounded by tall city buildings, we found ourselves in the square with all sorts of wintery fun at every turn.  Ice skating to our left, snow to our right, Santa ahead and so much more.  It was a challenge keeping the kiddos from running in three separate directions at once.  But I was able to wrangle them and get everyone on the same page.  Our first stop was  a visit to the Univision booth where the Helpful Honda Dealers led a game of hot potato for a chance to win passes to the ice skating rink.  Spoiler: The kids did not win.  But that's okay because there was so much more fun in store. 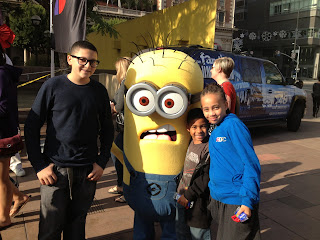 We wandered past food trucks and various vendors selling all sorts of goodies like unique handmade jewelry.  I didn't buy anything but there were some really beautiful necklaces that I spotted for just around $5.  This particular part of the festival didn't hold my kids attention so I was quickly whisked away to more kid-friendly attractions.  It didn't take long because there was literally something fun to do at every turn.  In fact,  just around the corner we ran into some celebrities!  The the minions from Despicable Me and the upcoming Despicable Me 2 (can't wait for that one). 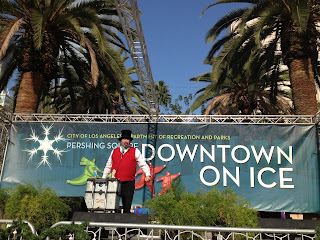 Next up,  we caught the Funny Eddie show- an interactive comedy and magic show that kept kids young and old entertained the entire time.  Even me and I'm a tough sell!  But this guy is no amateur.  "Funny" Eddie Medrano is a former Ringling Brothers and Barnum and Bailey Circus clown and you can tell he really loves what he does which makes him great at it.  He didn't miss a beat when the hecklers from the audience (including my 7-year-old son) got in on the act.  He had a clever comeback for everything that  only kept us laughing that much more. 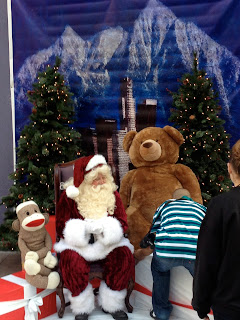 On the other side of the square near the fountain, fresh snow was being made (yes, made) in the snow zone for guests to go sledding on.  This was pretty awesome to watch and from the looks of it, even more fun to sled on but unfortunately we weren't able to get in on the fun this time around.  There was so much to do and so little time...

Craft tables like Christmas ornament-decorating stations were set up all around, as well as educational information booths on public safety (we learned about the potential dangers of electricity and to steer clear of fallen wires and such).  Pillsbury was on hand serving up complimentary cookies and cinnamon rolls.  Visitors got to take a ride through Pershing Square in holiday style on the Downtown on Ice Train Ride.  And what holiday festival would be complete without Santa to be on hand for photos and last minute wish list revisions? 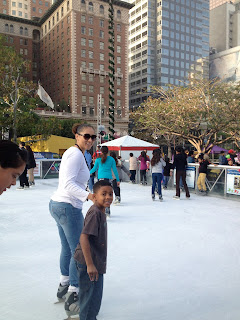 In my opinion, though, the main attraction here is easily Downtown on Ice, an outdoor ice skating rink reminiscent of the rink at Rockafeller Center in New York.  There is something so surreal about skating around on the ice while being surrounded by these big, old downtown buildings.  My only regret is that we weren't able to stay until dark to experience skating with all of the Christmas light glowing around the rink.  That only means we will have to go back because although the festival has passed, Downtown on Ice is open until January 21st.  If you're in the L.A. area or will be before then, you really must experience this rink.  There are several throughout the County but this one is both beautiful and a bargain at just $6 per session + $2 skate rental.

I'm giving my readers an opportunity to win a family four-pack of discount passes to Downtown on Ice.  Enter below for your chance to get four $3 off coupons.

a Rafflecopter giveaway
Posted by brunchinla at 11:44 PM