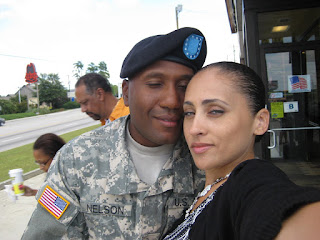 Yes, I finally got to see my husband! It seemed to take forever to get from L.A. to South Carolina and by the time I got on the base on Family Day I couldn't contain my excitement any longer knowing we were just moments from seeing eachother. After a very cool field demonstration and some announcements we were released onto the field to find our soldiers (and you better believe I was the first one out there!). It took me a minute to spot him but when I did I grabbed him and held him so tight I didn't think I could let go.

We spent the day exploring his base as there were many places he hadn't even been during BCT. It went by so fast, but the following day he got an off-post pass and got to come back to my hotel with me. After dinner we visited a shopping mall which I only mention because it was amusing to see how excited he was to be off of the base for the first time in weeks! I thought we might stay up and talk for hours after being limited to letters and 5 minute calls but after getting back to the room we just cuddled up and fell asleep. Something I used to take for granted, I think.

The next morning came too quickly, but he had to return to the base and I had an early morning plane to catch. It was harder to say goodbye this time, I think because I knew how hard separation would be. But it was wonderful to get to spend some time with him, no matter how brief.
Posted by brunchinla at 5:27 AM